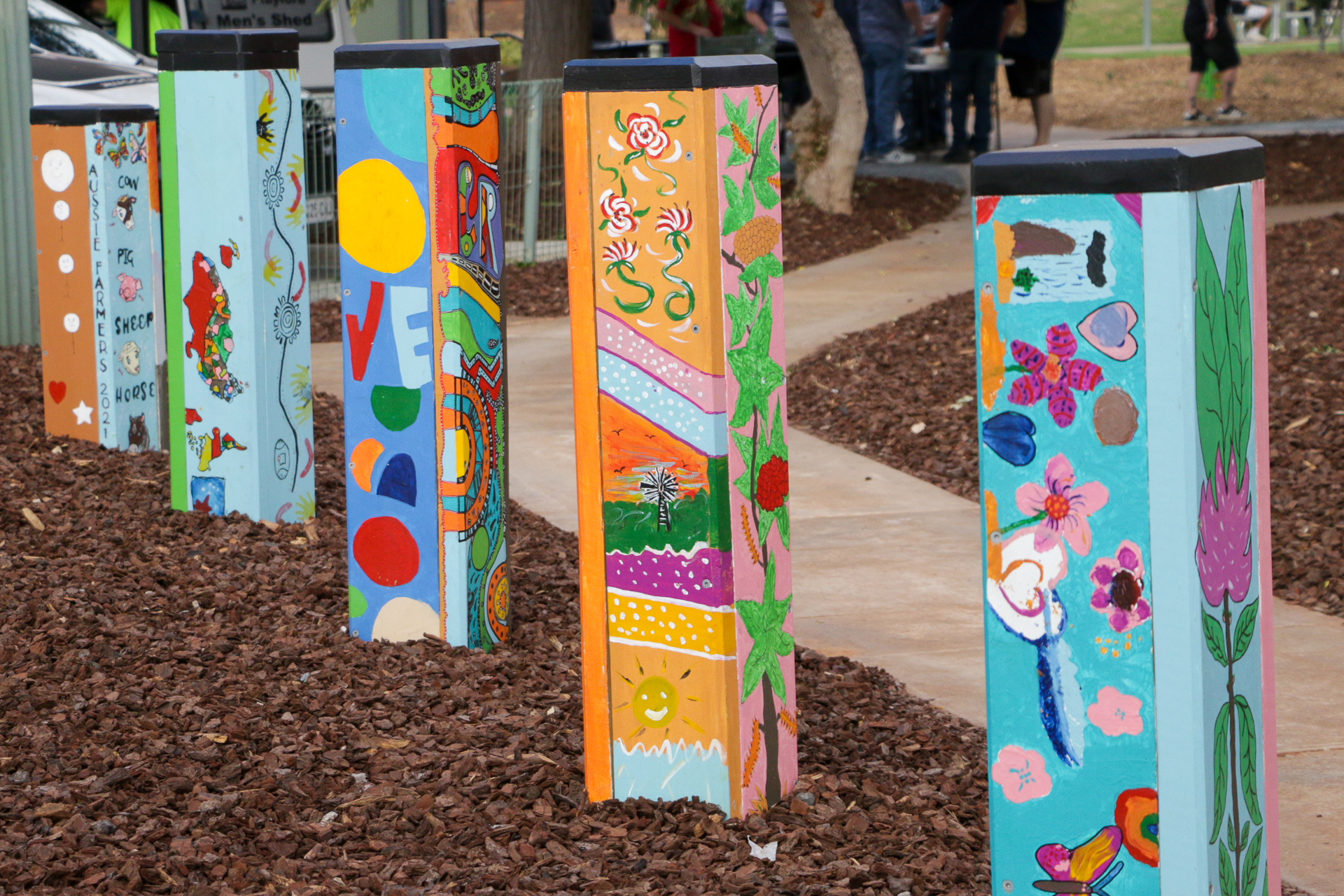 Believe Housing Australia customers have been hard at work commissioning and designing art for the community in Elizabeth Vale.

Several safety bollards and poles have been painted with art by Believe Housing Australia community housing tenants over the past eight months. This initiative is part of the Community Development Place Making strategy for the area.

Windmills, a rainbow iguana, pink gerberas and native animals painted with their names as spoken by First Nations people are among the hand-painted work that’s turned these suburban poles into vertical street art.

The artwork was recognised recently at a community event to celebrate upgrades to the garden area and installation of the art poles. Six local tenants and partners were acknowledged for their outstanding contributions in designing, painting, installing and management of the art poles.

Among them is Anthony – a retiree who likes to spend his time helping the community at Believe Housing Australia’s Elizabeth Vale housing.

“I painted some of the poles and sent them off to be put together,” Anthony said.

He said he was a little hesitant about getting involved at the start. “It’s the first time I’ve painted in my entire life. I’m not scared to do a job. If I don’t know it, then I’ll learn it.”

Design of the artworks was supported by Stephanie, owner of Hands on Creativity, through Believe Housing Australia.

“It was an amazing space, and we talked about what we can do here, and we decided on constructing the art poles,” Stephanie said.

The project – which normally takes a year to finalise – was completed in eight months.

“I have chronic pain, so I’d go in the front room and paint if I couldn’t sleep,” Taryn said.

Formerly known as AnglicareSA Housing, Believe Housing Australia continues to be a part of the AnglicareSA family and remains a subsidiary company of AnglicareSA.

Visit one of our five locations in metropolitan or regional South Australia, give us a call or contact us online.

Believe Housing Australia acknowledges the First Nations people as the traditional custodians of this land. We express our gratitude in the sharing of this land; our sorrow for the personal, spiritual and cultural costs of that sharing; and our hope that we may walk together in harmony in the spirit of Reconciliation.

Aboriginal and Torres Strait Islander visitors to Believe Housing Australia’s website are advised that this website may contain images, names and voices of people who have died.

We use cookies on our website to give you the most relevant experience by remembering your preferences and repeat visits. By clicking “Accept”, you consent to the use of cookies.
AcceptRejectCookie Settings
Manage consent

This website uses cookies to improve your experience while you navigate through the website. Out of these, the cookies that are categorized as necessary are stored on your browser as they are essential for the working of basic functionalities of the website. We also use third-party cookies that help us analyze and understand how you use this website. These cookies will be stored in your browser only with your consent. You also have the option to opt-out of these cookies. But opting out of some of these cookies may affect your browsing experience.
Necessary Always Enabled
Necessary cookies are absolutely essential for the website to function properly. These cookies ensure basic functionalities and security features of the website, anonymously.
Functional
Functional cookies help to perform certain functionalities like sharing the content of the website on social media platforms, collect feedbacks, and other third-party features.
Performance
Performance cookies are used to understand and analyze the key performance indexes of the website which helps in delivering a better user experience for the visitors.
Analytics
Analytical cookies are used to understand how visitors interact with the website. These cookies help provide information on metrics the number of visitors, bounce rate, traffic source, etc.
Advertisement
Advertisement cookies are used to provide visitors with relevant ads and marketing campaigns. These cookies track visitors across websites and collect information to provide customized ads.
Others
Other uncategorized cookies are those that are being analyzed and have not been classified into a category as yet.
SAVE & ACCEPT